Boring OR Homes For Sale

Boring OR Homes For Sale 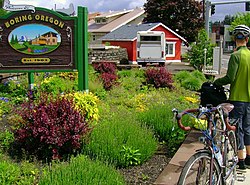 Boring is an unincorporated community in Clackamas County, Oregon, United States. It is located along Oregon Route 212 in the foothills of the Cascade mountain range, approximately eight miles (13 km) south of Gresham and Clackamas, and approximately twelve miles (19 km) southeast of Portland.[2] The Boring Lava Field, which lies between Portland and Boring, took its namesake after the town.

Named after William Harrison Boring, a former Union soldier and farmer who settled the area in 1874, Boring was officially platted as a railroad town in 1903 after the Portland Railway, Light and Power Company constructed a line to the area. The former railway is now part of the Springwater Corridor, a rail trail which begins in Boring and ends at the Eastbank Esplanade along the Willamette River in southeast Portland. After the town’s establishment, it became a major logging community prior to and during World War I due to the abundance of timber in the area. In addition to logging, plant nurseries and agriculture have also historically been major economic forces in the town.

In 2012, the town was paired as a sister city to the town of Dull, Scotland, United Kingdom, and to Bland, New South Wales, Australia in 2013 due to their unusual names.[3]

The town is served by the Oregon Trail School District, and is home to Naas Elementary School, Cottrell Elementary School, and Boring Middle School. Students’ test score performance in the public school system ranks above the national average.[30] Private schools in the area include Good Shepherd School and Hoodview Junior Academy.